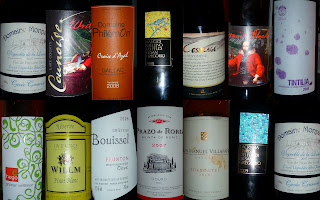 Thanks to Lisa's suggested theme - obscure grape varietals - our annual holiday AOC gathering was even more fun than usual. Attendance was great, and everyone seemed to really put some effort into their wine selections this time. The result was a number of interesting and enjoyable wines that most of us would not otherwise end up seeking out or tasting.

As usual, I didn't take detailed notes on each wine (seems like that practice died out about half-way through our first season...I will blame the members of the wine club for being too engaging and fun and for making me not want to sit there geeking out with paper and pen while everyone else is socializing). But I did manage to take pictures and look up the wines online, and I'll include notes from what I found as well as any that I recall first-hand.

Thanks also to Christine, who made us all really sweet little personalized glass tags so that we were not continually wandering around trying to find the glass that we set down, attempting to tell ours from the others by smudgy fingerprints or lipstick (I'm pretty sure no one in our group wears lipstick, so perhaps that's not a good example). This, in addition to the interesting wines, some very nice food contributions, good participation in the White Elephant gift exchange, and some new faces made this one of the best AOC gatherings we've had, in my opinion! Thanks to everyone who participated, below are the notes on the wines.

Don Manuel Villafane Estate Torrentes 2010 (varietal: Torrentes): As I was typing this, it struck me that this may be the first 2010 wine I've tasted. I'm often underwhelmed by Torrentes, but not this one. It was well balanced and fresh with notes of peach up front followed by citrus. Although I was familiar with this varietal, I had not tried this producer and I will definitely keep them in mind for the future, especially at this price point. ($11)

Hugo Gruner Veltliner: Not sure about the vintage here (the photo I took doesn't show it) but I'm assuming it was relatively recent. I don't have any recollections on this one, but the general characteristics of this varietal include fresh, bright, slightly vegetal scents with notes of flowers and white pepper accenting the green berry fruits. Funny enough, the following Saturday I was out to dinner with friends, and the person seated next to me was considering a Gruner Veltliner from the menu but had never heard of the varietal before. She ordered it, and liked it! ($10)

Domaine Philem'On Croix d'Azal Gaillac 2008: From southwest France, the varietal here is Braucol, also known as Fer Servadou, and Pinenc. The name supposedly refers to the iron-hard woodiness of the vine, and the variety is used to impart color, intensity and aroma to regional wines. This wine is comprised entirely of Braucol, which is rare. I would say that this definitely qualifies for the title of unusual variety! (???)

Prazo de Roriz Duoro 2007: This was my contribution, and although the blend of Touriga Nacional, Touriga Franca and Touriga Barroca are typical in the making of Duoro reds, I was banking on most us not being familiar with them. ($16)

Costalago Rosso Veronese (year?): From the Veneto region in Italy, the primary grape here is Corvina, which goes into the making of other well-known wines from this region such as Valpolicella and Amarone. The thick skins enable it to raisin without rotting, allowing it to impart the deep, rich flavors associated with Amarone. I think Gary brought this one...good job Gman! ($13)

Writer's Block Counoise (year?): This contribution came from Leonore, who was with us for the first time. She runs the wine department at the Social Safeway and has many years in the industry. Counoise is one of the varietals from the Rhone that is permitted in the making of Chateauneuf du Pape, and that the Wall Street Journal once joked about the obscurity of the varietal in an article on blends demonstrates that this was a great choice for this tasting. What makes it doubly interesting is that someone else also brought a Counoise... ($15)

Chateau Bouissel Fronton Classic 2006: This is a blend comprised mainly of Negrette, which according to Snooth "produces a light-bodied, pale red wine with an enticing gamey aroma with hints of violet backed by notes of ripe plums, licorice and fresh strawberry." A reviewer on Snooth described this particular vintage as "made in a hearty, rustic fashion...this is full of black, earth-driven fruit with rosemary and violets." This totally sounds like my kind of wine. Unfortunately, this particular bottle had some TCA (cork taint) going on, so I'm going to have to pick up a bottle and give it another try. And I plan to do that soon! ($12)

D'Uva Tintillia 2004: This might win the title of most obscure, since it is ridiculously difficult to find anything about it online! I came across a couple of sources who say that this grape is indigenous to Spain (the Canary Islands) but others that purport that it is native to Molise in Italy. At any rate, I'd like to find another bottle of this because it was well into the evening when we finally opened this (we were going youngest to oldest on the reds since we really didn't know anything about most of the varietals) and my recollection of it is hazy at best. One of the above referenced sources describes it as "full-bodied and colorful with an intense smell and flavor". Not very detailed. I don't recall where Kim said she got this, and nothing comes up on winesearcher.com. I suppose it's fitting that the most obscure wine of the evening would be difficult to track down!

Lacryma Christi del Vesuvio Feudi di San Gregorio 2009: Another player from Italy, this time from around Naples. The grapes are Coda di Volpe and Falanghina. This was a very fruity yet crisp and minerally white wine, and was well-liked by everyone in attendance. ($13)

Fiano di Avellino Dei Feudi di San Gregorio 2008: By the same producer of the previous wine. Again, from Snooth: "Fiano is a grape from Southern Italy that produces rather rich white wines that age well. They are naturally endowed with notes of honey and hazelnuts that gain intensity with aging. The aromas can be both smoky and waxy and help to frame the core of apple and pear fruit. It is not considered to be a particularly fruity wine but can be quite complex." In addition to appreciating the wines from this producer, I love the artwork on the bottles! ($15)

Willm Vin d'Alsace Pinot Blanc 2007: My first thought when I began typing this is that Pinot Blanc isn't necessarily a grape that I would think of as obscure; however, I realized that although I know I've tasted it before, I wasn't immediately familiar with its characteristics. Which led me to Google this particular wine, which led me to the following article on Pinot Blanc that I found extremely well-written and interesting. So I now know a good bit more about Pinot Blanc, have added another "must visit" destination to my list (Alsace), and am motivated to explore this grape further. http://www.winereviewonline.com/franz_alsace_pb_06.cfm. ($10)

The overall impression that I took away from this tasting is that the obscurity of some of these varietals means that they are, on the whole, being produced in smaller quantities and as a result are far more interesting than a lot of the stuff we see on the shelves each day. And although I was unable to find pricing on each wine, those that I did find seem to be very well priced in relation to their quality. 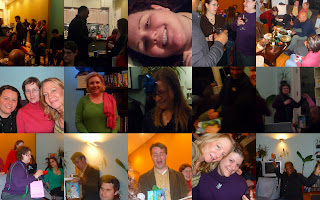 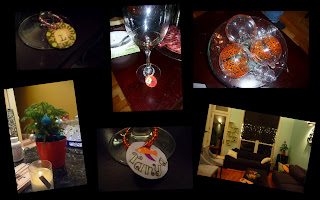