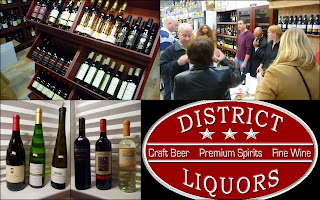 I stopped by District Liquors last night to see my friend Jeff Harrison and several of his colleagues as they celebrated the completion of District's renovations with a wine tasting for the public. As the consultant on the renovations and inventory improvements, Jeff has been busy working the same magic that he applied when he converted Modern Liquors from a rundown liquor store into an upscale, reputable neighborhood establishment. While there are still a couple of odd improvements pending at District, the transformation has been remarkable and I congratulate Jeff on another successful endeavor.

There were 12 wines offered at the tasting - three whites, three reds, three ports and three dessert wines. All high quality, all well-priced.

I took home three from this group and three miscellaneous bottles that I found on the store's shelves:

Daniel Gehrs 2007 Central Coast Syrah - I don't typically turn to Cali for my wines, but this was definitely Rhone-esque and immensely enjoyable, so it came home with me.

Bouchaine 2009 Napa/Carneros Bouche d'Or Chardonnay (late harvest) - Well, look at this - another one from California, and a dessert wine at that! The nose on this is amazing, with lots of bright fruit followed by a very nice, non-cloying palette. Not sure exactly when I'll have a good opportunity to open this, but I hope it comes sooner rather than later.

The three miscellaneous selections were a 2009 Skouras Moscofilero, a 2007 Skouras St. George Nemea Aghiorgitiko, and a 2010 Oracle Pinotage. These were all priced at under $12, and I'm looking forward to trying each of them for the first time. Jeff swears by Oracle, and the two Skouras selections are the best priced Greek wines I've yet seen in the US.

District is located at 11th & M Streets northwest in Washington, DC.
Posted by Kirstyn at 1:04 PM