FRANCE VERSUS DOWN UNDER - MARCH AOC 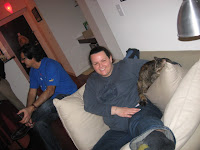 Thanks to all who participated in our “France Versus Down Under” tasting on Friday, and to Leslie for hosting. Michael sent his regrets that he was unexpectedly unable to attend with the Sauvignon Blanc from New Zealand due to circumstances beyond his control, but promises to bring it to a future tasting as he says it’s a good one!

Here’s a summary of our side-by-side blind tastings:

France: 2007 Domaine Gibault : This was one of the more feminine expressions of Sauvignon Blanc I’ve experienced, with scents of meadow grass and wet stones and a perfectly integrated acidity on the palate. Everyone seemed to like this very much, and I did well enough to head across town to Schneiders to pick up two bottles the next day. At $12.99, I would have purchased a case to take me through the summer if I weren’t going to be leaving the area soon. This was my WOTN, among several very nice wines. Thanks Leslie…good pick!

France: 2006 Domaine Cantarelles Payd du Gard: My contribution, and what can I say? It was the flop of the evening. Composed of 100% Viogner, this started out promising with a fairly aggressive aroma of peaches, but there was no follow through to the flabby, uninspired palate. We had people who never dump, dump this. If nothing else it was a good example of why Viogner is often used as a blending grape…it has a tendency towards high perfume but low acidity, and is often added to varieties with more reticent scent profiles. $13.99 at Calvert Woodley, I can’t honestly even imagine taking a bottle for free if it was offered.

Australia: 2007 Shoo Fly Buzz Cut: This is an unconventional blend of Verdelho, Viognier, Sauvignon Blanc and Reisling that I’ve had before on several occasions and enjoyed very much. What’s interesting about this wine is that each of the white grape varieties that contributes to it has very unique, individual characteristics, yet they somehow come together nicely here, with none of the players trying to steal the show. Winemakers notes say, “…a refreshing, firmly structured wine. Rich and vibrant flavors of tropical fruit, apricot, and grapefruit work wonders on the palate.” You can find this at stores like Harris Teeter or World Market. Thanks to Christine for this one, nice QPR (Quality/Price Ratio) at around $11.99

France: 2003 Joseph Drouhin Savigny les Beaune: I had actually picked this up for my own consumption, but when Merit had to cancel last minute I brought this along to stand in for her contribution. I am a big fan of the Savigny appellation, but 2003 was an atypical year in (really hot) and in my opinion, this wine suffered from it. What would normally be a rather ethereal, earthy wine with bright fruit and acidity ended up being much more concentrated and fruit forward. Some people did like this however, and to them I would recommend trying some pinot noir, which is similar to this style. At $28.99 however, I think you could do much better with something else. (Note: The same producer/appellation from a more typical year would yield not only a different wine, but a pricetag of about $39.)

New Zealand: 2006 Tohu Marlborough Cuvee: Leslie contributed this wine in addition to the Sauvignon Blanc from , when her co-worker who had volunteered to come had to drop out last minute. Smoky, brambly nose and a very rich, fruity palate, I think that this is a knock-out at $14.99. If I had to gripe about anything, I’d say that the smoky nose might have been a bit too aggressive, but I think this was a really good representation of Marlborough Pinot Noir for the price. It really came down to personal preference with these Pinot’s…the room seemed divided in half as to who liked which best.

This part of the evening was the most fun and educational for me, because it knocked out some stereo-types I held, and reinforced others.

France: 2007 Guy & Thiery Fat Bastard Shiraz: First thing I noticed was that this was labeled instead of Syrah, which is something I have never seen on a French label. It threw me not only because of the labeling, but because I normally detest Aussie Shiraz but love a good French Syrah, so I was all sorts of discombobulated now. In addition to the heretofore mentioned emotions, I have seen the Fat Bastard label on many a grocery store shelf and never considered purchasing a bottle because…well, because I’m a wine snob. I shy away from mass produced wines, and Fat Bastard falls into that category, along with labels like Pinot Evil, Red Bicyclette, etc. If it has a cutesy name, I ain’t buyin’ unless I’ve been assured by someone whose opinion I trust that it’s worth it. Anyway…the aromas on this were grapey and the palate forgettable. I would call this the red counterpart to my Viogner for the evening, although I didn’t see anyone dumping this one and at $9.99 it’s still a better value than the Viogner that I brought.

Australia: 2002 Black Opal Shiraz by Wolf Blass: Wow…I actually liked an Aussie Shiraz. The nose on this, while still more fruity than what I normally seek in a Syrah, also carried typical Rhone-like tertiary notes of barnyard and leather, and the palate was full and meaty with well-integrated oak and respectable but not over the top alcohol levels. I searched extensively on the internet for retail prices on this, but found very little out there (which is bizarre, because this brand, too, falls into the mass produced category). I think that this particular year may just not be widely available anymore, but I did find some retailers in Indiana who are selling it for…$6.99!!! If this price is correct, then Dennis takes the prize for absolute best QPR of the evening!

France: 2005 Chateau D’Escurac Medoc Cru Bourgeoise: James’ contribution was a classic from a classic vintage. Shy notes of cedar and woodland lead into sturdy, well-integrated tannins on the palate…this wine is still young so it’s not showing its absolute best, but in 5-10 years my bet is that it will be a beauty. I wish I had a bottle of this to cellar. Very nice, and at $20 for a 2005 , quite a value.

Australia: We finished off the evening with Mehrdad’s contribution, a 2003 Stone Coast Cabernet Sauvignon. I was able to find even less on the internet about this one than the Black Opal…it appears that this is a boutique, limited production wine and not easy to come by in the U.S. The winemaker is well known in , and the brand has a nice website with an interesting story if anyone would like to take a look: http://www.stonecoastwines.com/index2.html. My notes for the evening were non-existent, I’m going strictly by memory here, but I recall this having the classic cabernet sauvignon characteristics that I mentioned in James’ wine (cedar, woodlands, red berries), only this was more forward and accessible, which I would expect from an Australian producer, as their techniques tend towards wines that are ready to drink young.


All in all, I think this was a really fun and informative event! We were happy to have three new people attending – Matt, Jessica and Jim – and hope that they’ll join us again in the future.

I also want to thank everyone for their extra contributions: All those who brought munchies (Lisa’s little filo-dough things were awesome!), Maria and Vince for the lovely New Zealand dessert wine and cake, Matt and Jess for the big-ass bottle of plonk that we all sucked down at the end of the night, and Mehrdad for his Bourgogne that he left for whoever and which is now residing in my wine rack, but surely not for long J