Thanks to everyone who participated in our Sparkles & Stickies gathering on Friday! Below are some pictures from the event, the wines we sampled, approximate retail prices and where you can buy them, as well as any miscellaneous details or comments I can recall regarding each wine. Unless otherwise mentioned, all of these were Non-Vintage, meaning there is no year attached to them (as is the case with many sparkling and dessert wines). 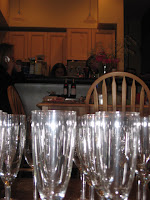 We started the evening w/ a Zardetto Prosecco di Conegliano from , . The overall consensus seemed favorable, no socks blown off but we all seemed to agree that this is a pleasant quaffer. This retails for around $10.99, and can be pretty easily found at most wine stores (The Wine Specialist, Calvert Woodley, etc.) 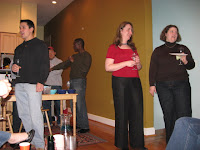 Next up was the Gruet Blanc de Noirs from New Mexico, which came as a surprise to many. First, that it was from . Second, that it was pretty good! We don’t often think of as a wine producing state, but this producer actually makes several different wines, including a Pinot Noir, and has a pretty good reputation. The nose on this was intense – fruity and yeasty – and the palate profile was pretty rich for a sparkler. $12.99 at MacArthur Beverage or the Wine Specialist. 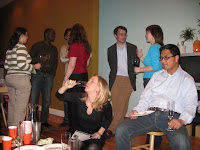 Moving on to , we had a Cristalino Brut Cava. There were a couple of people who liked this the best so far out of the three we had tasted, although the majority were still stuck on the fullness of the Gruet. Had I known how much lighter this one is, I would have served it first. Certainly can’t beat the price at about $6.99 (The Wine Specialist). 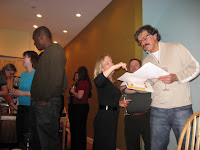 Back across the Atlantic, we then opened the Roederer Estate Brut NV from . This producer also makes a champagne (remember, only wine that is produced from grapes from the region of can actually be legally be called champagne) but unfortunately our budget wouldn’t allow us to sample that. It might have been interesting to taste the two side by side. This was a hit overall, and a very fresh, well made, balanced sparkling wine. On sale for $17.99 at Calvert Woodley, this is a fabulous price for this caliber of wine. 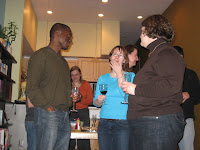 We moved then to the Jura in , a region in the east near . I’ve tasted still wines from this region, which is known for producing quirky yet elegant juice that bespeaks of the terroir in which its grapes are grown. I’ve always found them intriguing and enigmatic, and the Clavelin Cremant du Jura was no exception. Pungent nose of earth and nuts and ripe fruit. Some of you liked this, some not so much, but I think it was probably my WOTN (wine of the night). $15.99 at MacArthur Beverage. 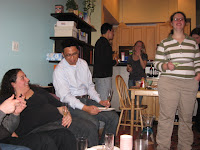 The next wine provided us with an interesting comparison opportunity. There was a difference in color/intensity between the two bottles of Lucien Albrecht Brut Rose (pinot noir) that was immediately noticeable. We opened the pale, washed out bottle first and found an interesting smoky nose that we all seemed to like, followed by a pretty flat, boring palate (the bubbles were noticeably lacking, and this is a wine that I’ve known to have prolific, fine bead that goes on forever). The nose on the second bottle, whose juice was a pale salmon color, was distinctly different - just the red fruit that one would expect from this particular wine. I was disappointed w/ the bubbles here too though…I recall this being a much more gregarious sparkler in the past. I'm not sure what happened to the first bottle...exposure to heat or sunlight or whatever...but it was clearly affected by something (even though many of us seemed to like it despite its "flaws"!) $16.99 at Calvert Woodley. 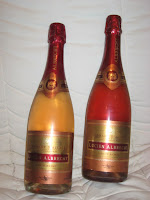 We began our transition to the sweeter wines now by opening an Eredi Lodali Moscato d’Asti from the Piedmont region of . Some liked this and some found it too sweet, but it was a well made, classic Moscato, with aromas of pear, typical of this type of wine. $12.99 at Calvert Woodley.

We had a surprise appearance at this point from , courtesy of Michael who brought a sparkling . I was really pleasantly surprised by this one, not being a huge fan of Australian . It had a nice fruity bouquet of berries, chocolate and tobacco, and I heard many positive comments from the group. If Michael would be kind enough to share the particulars (year, producer, and where it might be found locally) I’m sure there are some of us who would be interested. Thanks!! 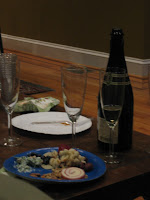 On to (, specifically) for the Jackson Triggs Vidal Icewine. The tangerine and mandarin orange aromas in this were gorgeous. This is an award winning wine, and I think it showed. However, we’re moving into “acquired taste” territory now…a number of people commented that this was just too sweet for them. My personal thought is that if you’re going to taste and really try to evaluate wines like this, it’s best done with a clear palate and a clear mind. It’s only then that you can really appreciate the acidity that lends itself to balancing out the sweetness and keeps a dessert wine from being “cloying”. Cheers to our resident Mead Master Steph for seeing the beauty in this wine and calling it his WOTNJ $21.99 for a 187ml. bottle at Calvert Woodley. 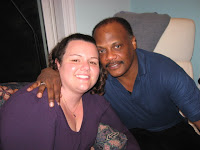 We wrapped up with type of wine that I’ve been wanting to try for some time, an Italian dessert wine called vin santo. This Felsina Chianti Vin Santo 2000 was a last minute replacement for an Australian dessert wine that I had originally planned on serving. The vin santo had port-like characteristics (aromas of raisins and prunes) but had a more aggressive palate which tasted almost fortified. This would make for a great fireside night-cap. $36.99 for a 375 ml. bottle at MacArthur Beverage.

It was nice to see a few new faces in addition to the regulars, and I hope you all enjoyed yourselves as much as I did. Thanks again to Lisa for hosting, and to all of you for your food contributions. Please feel free to post comments or questions you might have!